Thanks to Don Snider of Merry-Go-Art for providing some great photographs of the ride in operation at the park. 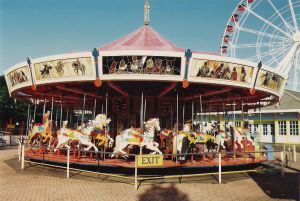 This is a great full color shot of the Carmel Parker Carousel, which was originally at Maple Leaf Village. This Carousel was sold off at the end of the 1988 season and replaced with a newer Chance Rides model
(Don Snider - Merry Go Art Photo) 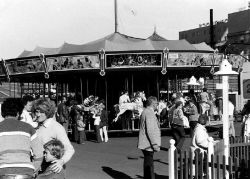 The wonderful Carmel/Parker Carousel was sold before the opening of the 1989 season in order to pay for park upgrades. It was replaced by a metal & fibreglass model from Chance Rides.
(Niagara Falls Ontario Library) 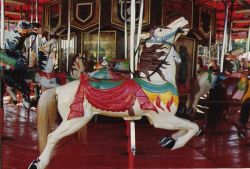 One of the magnificent horses on the MLVP Carousel.
(Don Snider - Merry Go Art Photo) 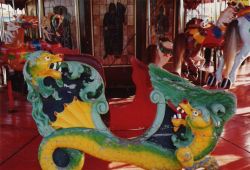 The orignal carousel had 16 stained glass panels around the upper edge of the canopy. When the Carousel was sold at auction, it was broken up, like many other older Carousels, as it was worth more in pieces, than it was complete. Recently, the panels have resurfaced at a furniture store in Oakville. The panels are being built into a gazebo. 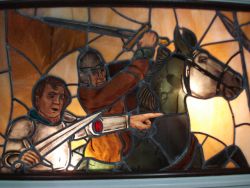 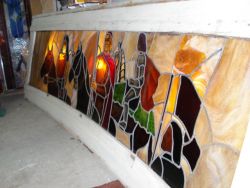 One of the cleaned up panels off the original Carmel/Parker Carousel. This panel is the second one from the left in the Carousel photo above. 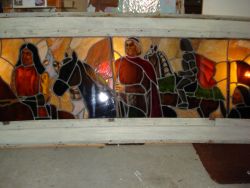 A head on shot of the same panel above.