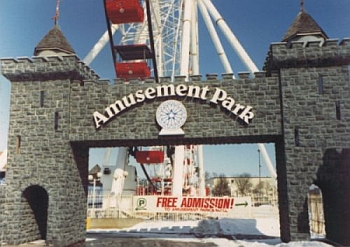 Maple Leaf Village, which opened in 1979, was an attraction which had a large shopping mall, with various types of attractions, many focusing on kids. The mall had many different stores and attractions as well. There was an old time photo shop, a candy store , Ripley's Believe it Or Not Museum (where you could talk to a "Genie in a bottle"), the Elvis Presley Museum, and numerous different souvenir stores. There were also attractions for kids, including a large play area that had a ball crawl, rope climbs, etc. In later years, there was a laser game, where players went though 4 chambers, shooting at aliens behind glass walls as they lit up. Points were scored for how many you hit, and you would see how well you did at the end of the game. Lilly Langtrees Theatre housed live shows, and near the end of the mall, featured a magician. A 50's nightclub called Shaboom's featured music from the 50's, along with great food and a couple classic cars. Robert Gibbs, who once operated the haunted house at Wet 'n' Wild had the Nightmares haunted house attraction inside the Mall. The second floor had a large food court (where most of the Park workers could be found when not at their rides) that had food for all tastes.

The amusement park outside, which featured the largest Ferris Wheel in the Western Hemisphere, was operated by Conklin & Garrett Shows in the early years.

Because the park was operated by C&G, the rides often changed from year to year. We do know they had at different times, a Rotor and an Enterprise, which were not there towards the end of the 80's. The last years saw a decent assortment of rides in the park. Uniforms in the early days consisted of plaid shirts and denim overalls with matching caps.

Park ownership eventually went to York Hanover Hotels, owners of the Brock Plaza, Foxhead, and Village Inn. The final 4 yrs of the park saw many improvements, but in the end, YH was bankrupt, and looking to raise money for the creditors. The park was the casualty of the bankruptcy. The final year, the park did very well. Unfortunately, it wasn't enough, and at the end of the 1992 season the rides were packed up and sold. The Giant Wheel was sold for $560,000.00, and went somewhere in Asia. The final auction at the park saw many people, including 7 of the former workers, looking for some trinkets from their time there. (yes, I was one of them) The mall was purchased by local businessmen, and was pretty much empty at the time it was converted into the Cities first Casino. When the Casino was constructed, much of the interior was altered to the point where you can't even identify where things were. Even the stairs and escalators were changed.

Complete list of the rides that were in the park at the end of the final season:

List of the games that were in the park at the end of the final season: 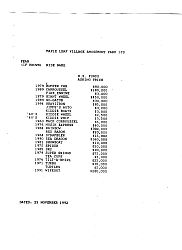 When the park was selling off the rides, this sheet listed the prices in US$ each ride was being sold for. Unfortunatly, not all of the rides sold and may have been scrapped (the Showboat is one of them).
(APHAN Collection) 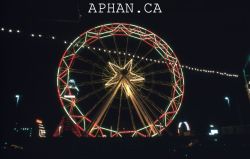 The Giant wheel, for many years during the Winter Festival of Lights, was done up to resemble a giant wreath. all 12000 light bulbs were changed from white to red and green, then back again when the Festival was over. Photo taken December 1984
(APHAN Collection) 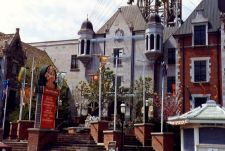 This is the view from Falls Avenue at the front of Maple Leaf Village. When Casino Niagara was built, this facade was kept, and is now indoors as part of the Casino.
(Niagara Falls Ontario Library) 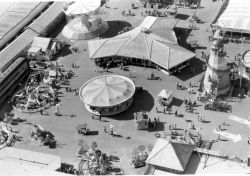 The park in the early years, showing the Kiddie Ferris Wheel, Red Baron Planes, Carousel, Dixie Dangler Swings, Lighthouse Slip (slide) Bumper Cars, and the Fascination Building. One of the C&G railway coaches (used for an office) is on the left side of the photo.
(Niagara Falls Ontario Library) 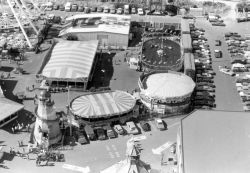 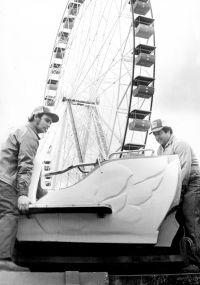 A couple of park workers put one of the swans on the Swan Lake ride with the Giant Wheel in the background.
(Niagara Falls Ontario Library) 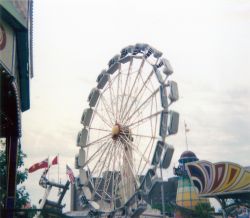 In the years under Conklin Rides operation, the park had an Enterprise and a Rotor. Also in this photo is the Bumper cars (behind the Enterprise) and Swan Lake, which later became the Music Express.
(Photo by Ron Fritz - APHAN Collection) 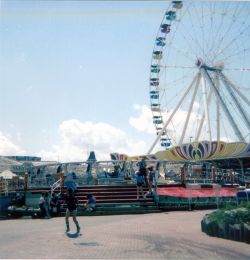 The Enterprise is in the lowered position, loading for the next ride. The Giant Wheel is visible in the background. In the early years, the gondolas were all painted different colors.
(Photo by Ron Fritz - APHAN Collection) 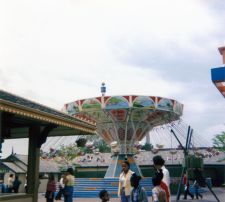 In the 1980's, the Dixie Dangler swing ride was painted quite a bit different than in later years. Compare this photo with the one below.
(Photo by Ron Fritz - APHAN Collection.)

The Dixie Dangler swing ride is shown at the end of the final season. Visible at left is the frame of the Mack Car Carousel. The Orange Railcar (park offices) is behind, while the restrooms are at right.
(APHAN Collection) 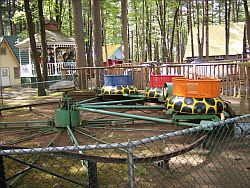 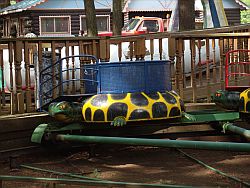 A close up shot of one of the turtles. The ride was never this detailed when it was at the Village. It's good to know this ride will be entertaining children for years to come.
(Photo courtesy of Magic Forest Park) 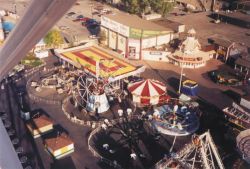 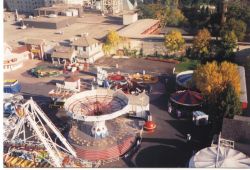 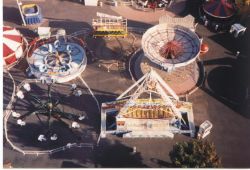 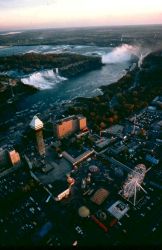 Postcard view showing the park and both the AMerican and Horseshoe Falls.
(APHAN Collection) 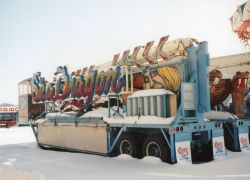 The Chance Sea Dragon, packed up onto its 2 trailers at the end of the final season. Part of the Turbo trailer is visible at left, while the swing ride can be seen in the upper right corner.
(Photo by Ken Jones Jr.)

The rare Chance Turbo is packed onto its 2 trailers, at the end of the final season. The Turbo would be sold to Conneaut Lake Park.
(Photo by Ken Jones Jr.) 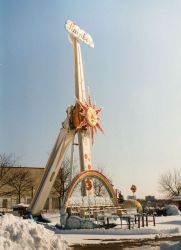 The Huss Rainbow, taken after the final season before being dismantled and sent to Playland in Vancouver.
(Photo by Ken Jones Jr.) 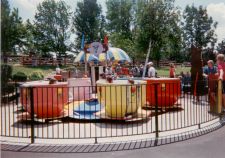 The Maple Leaf Village Tea Cup ride was sold off after the park closed in 1992, and is shown here, operating at Darien Lake in 1996.
(Photo by Ken Jones Jr.) 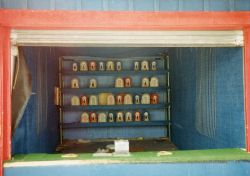 Maple Leaf Village had many games including Wac-A-Mole, ring toss, Wacky Wire, Machine Gun (where you shoot out the red star on a piece of paper), and Punk Rack. The Punks were all lined up along the wall on a hinge, and you had to knock them down by throwing a baseball. If you knocked 3 down, you won a prize.
(Collection of Ken Jones Jr.) 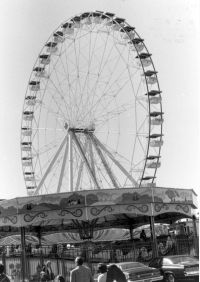 The Giant Wheel was the backdrop for many photos taken at the park. This shot shows Swan Lake (Later Music Express) with the wheel in the background.
(Niagara Falls Ontario Library)